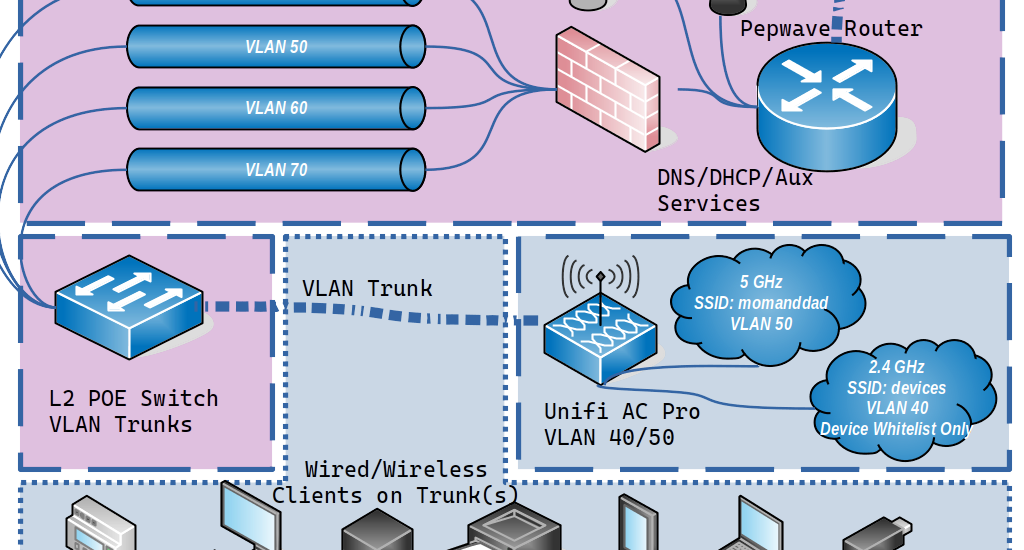 Internet was one of the most challenging technical implementations I had to solve on the bus. For me, it was more difficult than building the battery and energy systems, or the roof raise. Here is a brief tale of my journey.

While building the bus, I placed a spare wireless router in it that just had a wireless backhaul to the “real” router in the house, because the steel walls of the bus significantly attenuate wireless signals.

Using that WiFi router worked even when away – as long as I was near another accessible WiFi network. There were small technical issues that constantly got into the way – reconfiguring the router for a new SSID all the time was awful. The signal wasn’t very good. Sometimes it just stopped working, or it was incredibly slow.

At some point, we sold the house and had to leave, so I couldn’t use that system anymore.

So, while surfing in the driveway at a friend’s place for a bit, I bought my first exterior WiFi antenna with ethernet at Fry’s electronics (my first mistake). I found out it was an old POS that was at least a decade out of date and only supported ancient WiFi protocols. That went into the trash bin without ever actually working.

So a week or so later at a different location I went back to looking at offerings specifically for RV and Marine, and I found lots of USB WiFi modems on sticks that have VERY long USB cables to a dedicated basic router. I bought an Alfa unit, which worked OK for a while.

Next came a cellular modem – I used a Netgear LB1121, which is a small modem with POE port so I could just run it off a network switch with Power Over Ethernet. This was pretty successful – it plugged into a Netgear AC1200 router/firewall WAN port, and routed the LTE antenna through a waterproof gland onto the roof.

I found the antenna was highly directional and susceptible to movement, but without that antenna reception was basically zero inside the metal bus.

I found quickly that the base software on the AC1200 is kind of limited, and didn’t support multiple WAN interface selection. So, I loaded DD-WRT which helped quite a bit for customization but was complex and static to configure – any time we moved I had to log into it and change routes or deactivate WiFi.

Basically, a rather complicated, manual, pain in the ass. And I needed reliable internet that actually works, FOR work. Also, the rest of the family wanted to maybe stream video, or use the internet too. Also, the first time we didn’t have WiFi, the kids drained the monthly cellular data limit to zero in just a few hours.

Somehow, I managed to limp this system along for a few months. We traveled across the US, and stayed with relatives for the holidays that winter. During that time I got really serious about what to do with internet, and came up with the following rules.

Turns out that this problem is already solved, but it’s not aimed at the RV industry. What I should have done is look at mobile ATMs, and municipal coaches/busses.

I kept the power over ethernet switch – that was a good move. But I threw everything else out after I got a commercial spec cellular router, antenna, and signal amplifier.

The three resources I found the most useful were 5gstore.com (where I purchased my equipment) ltefix.com, and ltehacks.com

I use data plans from Sprint and ATT, which when combined give me more than enough monthly data allocation for everything we use.

This equipment combination (and there are other synonymous setups) has worked very well for us. It’s reliable, functional, and handles traffic very well.

If there is anything I would change, I had considered using a Cradlepoint router, or some other more custom built router. But I like the support from Pepwave, so it’s fairly hands-off.

Hopefully these diagrams are helpful for you – they illustrate the actual core equipment used, and the way they are logically configured. (Click to Embiggen)

10 Replies to “Internet and Network Overview”